from FT.com – World, Europe
Cold weather and reductions in supplies from Europe have put strain on the gas systems across the continent

from BBC News | Europe | World Edition
The Arctic conditions sweeping Europe tighten their grip, with more deaths reported in Poland and Ukraine, taking the toll to well over 200.

from BBC News | Europe | World Edition
The Arctic conditions sweeping Europe have tightened their grip, with more deaths reported in Poland and Ukraine, taking the toll to well over 200.

from BBC News | Europe | World Edition
The Arctic conditions sweeping Europe have tightened their grip, with more deaths reported in Poland and Ukraine, taking the toll to well over 200.

from Social Europe Journal by Henning Meyer
Irish economist David McWilliams gives us a first lesson in punk economics, explaining the European economic crisis in 10 minutes and pretty much all of it is spot on. A great way to visualise the very complex nature of the current predicament.

Merkel: ‘Normal’ to back Sarkozy

The troika has presented Greece with an ultimatum. Prime Minister Lucas Papademos must inform the EU, IMF and ECB today of whether his governing coalition will accept the austerity requirements in return for further financial assistance. The party leaders are particularly reluctant to accept labour market reforms. The country consequently remains a danger for the financial markets, some commentators write, while others call for the pressure on Greece to be eased.

by Open Europe blog team
Greece is on a “knife edge”. That was how Greek Finance Minister Evangelos Venizelos put it on Saturday ahead of emergency talks between Greek political parties and the EU/IMF/ECB troika (with eurozone countries and private sector bondholders thrown in there somewhere as well).

We’re sure you’re thinking – surely, we’ve heard this all before? That may be the case, but unfortunately this time may be different. For once, Greece has a hard and fast deadline to meet to avoid a disorderly default.

from Hurriyet Daily News
As time ticks, the brinkmanship between Greece and the eurozone continues. Eurozone finance ministers on Saturday asked for a guarantee from Greece to implement a new round of austerity measures, before they approve a second financing package

War in Europe? Not so impossible

from Eurozine articles by Ovidiu Nahoi
The dark warnings of the Polish finance minister about the prospect of war in Europe if the crisis deepens were met with scepticism. But there is no call for complacency about where current, nationalist tendencies might lead, writes the editor of “Adevarul Europa”. [Danish version added] 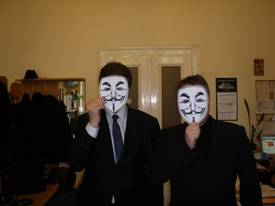 by Grahnlaw
I was reminded by @alexanderhanff on Twitter that the EU trade commissioner Karel De Gucht asked members of the European Parliament to disregard public opposition to ACTA (Infojustice). In my view De Gucht’s attitude (letter at La Quadrature du Net) is enough to deserve rejection of the Anti-Counterfeiting (and much more) Trade Agreement ACTA (Grahnlaw).

?Hollywood versus The People? ACTA causes flood of protest

by Grahnlaw
What the Pirate Party founder and inimitable digital freedom evangelist Rick Falkvinge calls the ?Hollywood versus The People? Anti-Counterfeiting (and much more) Trade Agreement ACTA has caused the biggest political protest storm ever among EU citizens.

We Need Copyright Reform, Not ACTA!

from TorrentFreak by Marietje Schaake
The internet is a great tool to alert politicians to all the dangers of this treaty, just as the internet was a tool to mobilize people against the SOPA and PIPA bills in the US. For any lobby to be effective, however, it must be fact based. Misinformed criticism helps those supporting ACTA.

SOPA, ACTA and WIPO: where is the copyfight headed?

Michael Geist sez, “I’ve posted a video version of a recent talk on SOPA activism and what it means for the next generation of global copyright agreements such as the Anti-Counterfeiting Trade Agreement and the Trans Pacific Partnership. The talk is about an hour as it also assesses the global strategies employed by the U.S. and copyright lobby groups of shifting away from WIPO toward closed negotiations (like ACTA) and domestic copyright pressure (like the Canada’s Bill C-11, which is a combination of DMCA + potentially SOPA).”

from Project Syndicate by Daniel Gros
GROS: Austerity under Attack As the European economy risks falling into recession, many observers are asking whether austerity could lead to such a sharp decline in economic activity that revenues fall and the fiscal position actually deteriorates further. But it would be dangerous for the eurozone?s highly indebted countries to abandon austerity now.

Is Europe setting up clash between Muslims and the West? – CNN.com

(CNN) — Europe and the Muslim world seem to be on a collision course that could have major political, economic and ideological ramifications. January 23, 2012, may well come to be remembered as the crucial date when Samuel Huntington’s “clash of civilizations” thesis, which many of us believed discredited beyond repair, was reaffirmed.

from FT.com – World, Europe
Emil Boc quits after weeks of nationwide protests against austerity measures and before a parliamentary election due late this year

How to understand Hungary , George Schöpflin

from open Democracy News Analysis – by George Schöpflin
The portrayal of Hungary and its current government by the international media and external actors is one-sided and lacks context, says the academic and Fidesz member of the European parliament, György Schöpflin. The effects are felt within the country, and raise deeper questions about the European Union and its underlying values.

from open Democracy News Analysis – by Patrice de Beer
France’s disillusion extends beyond the country’s president to its political class, economy and sense of social direction. The beneficiaries may include the far-right Marine Le Pen as well as the centre-left François Hollande, says Patrice de Beer.

Exceptionalism as an excuse in Europe?s crisis, Marco Scipioni and Dionyssis G. Dimitrakopoulos

from open Democracy News Analysis – by Marco Scipioni and Dionyssis G. Dimitrakopoulos
This crisis is being used by the national leaders to push the EU down the wrong institutional path, namely intergovernmentalism. The British Tory-led government veto played a role in this, pushing the other member states down the only road that remained available to them, an intergovernmental treaty, but it did so on already ?fertile ground?.