from NYT > Turkey by By DAN BILEFSKY and SEBNEM ARSU

While Washington and Europe praise Turkey as the model of Muslim democracy for the Arab world, human rights advocates say the government is curbing press freedom. 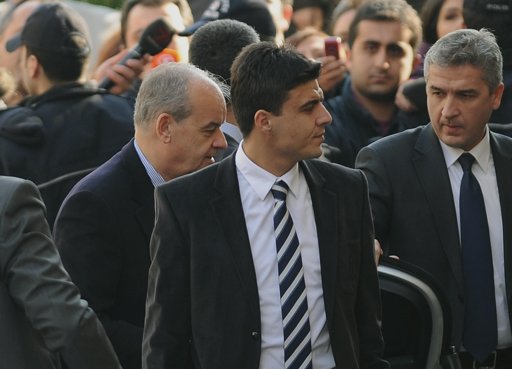 Turkey’s former Chief of Staff Gen. Ilker Basbug, center left, is surounded by security officials as he arrives at a prosecutor’s office in Istanbul, Turkey, Thursday, Jan. 5, 2012. Basburg is testifying in a trial of current and former military officers alleged to have attempted to destabilize the country’s Islamic-rooted government through an Internet campaign. Hundreds of officers have been jailed so far.(AP Photo)

Journalists defend themselves over coup case

Journalists on trial in Turkey mock conspiracy case
Reuters India
Like Sener, he is accused of belonging to the ‘Ergenekon’, an ultra-nationalist group accused by prosecutors of being behind multiple conspiracies against Prime Minister Tayyip Erdogan’s AK Party government. If found guilty the two face a maximum of 15

Journalist pleads he is anti-coup

from Hurriyet Daily News
Suspect Barış Pehlivan said during the seventh hearing of the Oda TV trial he was a journalist who was against military coups.

Charges Against Journalists Dim the Democratic Glow in Turkey
New York Times
ISTANBUL ? A year ago, the journalist Nedim Sener was investigating a murky terrorist network that prosecutors maintain was plotting to overthrow Turkey’s Muslim-inspired government. Today, Mr. Sener stands accused of being part of that plot,

GÖP Urged for Fair Trial and Release of Journalists

from Bianet :: English
On the day of the 8th hearing of the Oda TV trial, representatives of the Freedom for Journalists Platform called for fair trial procedures in accordance with the law and urged for an end of the detention of the indicted journalists.

from Hurriyet Daily News
A new indictment that highlights former Justice Minister Seyfi Oktay as the No. 1 suspect in the ongoing Ergenekon case was accepted yesterday by the court.

Two Students Under Custody Since 2009, Despite Lack of Evidence

from Bianet :: English
Two university students, who were arrested during a demonstration will remain in prison as the the prosecution fail to show any evidence for allegations against them. Another student, who had been a symbol of freedom of expression violations against the youth, is condemned to 20 months in prison.

from Bianet :: English
36 of the 49 people taken under custody during the latest wave of police operations against the alleged pro-Kurdish organization KCK, are arrested by the court.

from Bianet :: English
Radikal daily editor Ertuğrul Mavioğlu has been acquitted on charges related to an interview he made with the rebel group PKK’s leader Murat Karayılan.

from Hurriyet Daily News
Compensating the families of 35 villagers killed in a Dec. 28 air raid will amount to a ‘material apology’ although a verbal admission of guilt could follow depending on probe results

from Bianet :: English
Evren and Şahinkaya, masterminds behind the 1980 military coup, are facing life sentences on charges of “changing the constitution by force”.