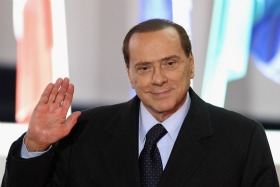 from euro|topics
After losing his parliamentary majority, Italian Prime Minister Silvio Berlusconi announced on Tuesday evening that he was ready to resign. But he wants to give up his office only after the new budget law has been passed. That is too late because the country badly needs to win back the confidence of the financial markets, commentators write.

In pictures: Berlusconi in politics

The secret of Silvio Berlusconi’s success

from European Voice – RSS – News & analysis
Papandreou says deal on interim unity government has been reached, but not on who will lead it.

from euro|topics
Italy’s Prime Minister Silvio Berlusconi on Monday refuted speculation about his resigning. But several members of his centre-right coalition could bring him down by withholding their support in a parliamentary vote today, Tuesday. Berlusconi’s downfall is now imminent because of the debt crisis, commentators write.

What is Papandreou?s real agenda? (Analysis)

from EurActiv.com
Greek Prime Minister George Papandreou’s decision for a referendum on the bailout package that shook-up the EU and the international community was based on the ignorance of the effects of their political actions that most dynasty leaders have, argues Florian Pantazi. 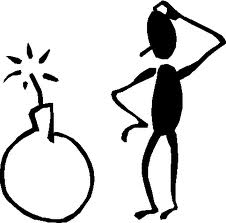 This should send alarm bells ringing in No 10: As the Sunday Telegraph noted, in a forthcoming report this week, we’ll be pointing to the concerningfact that, in future, the UK and other non-eurozone members could be left in a permanent minority in the Council of Ministers – the EU’s key forum for decision-making.

Solidarity: The Emptiest Word in Eurospeak

from Atlantic Community RSS-Feed
Julian Steven Lindley-French: France and Germany&#8217;s past actions expose their current plea for “solidarity” as empty rhetoric. What they really want is more money from the British taxpayer. It will be gladly handed over, but only after they emerge from their Euro fantasy land and take real steps to solve the crisis. (Start with booting Greece.)

Italy under pressure to push through reform plans

Note to EU: This is how austerity works

by Open Europe blog team
Ireland?s economic troubles are well documented, but at least the government has demonstrated its willingness to get to grips with its own budget deficit by taking some unpopular decisions, this time not with the electorate however, but with its own ministers. The Irish Independentreports that Taoiseach Enda Kenny vetoed his Justice Minister Alan Shatter?s request to use the government jet to fly to an informal EU justice and home affairs council meeting in Poland back in July. 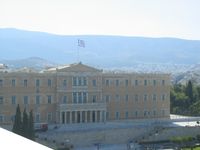 Is this a 21st century version of Nero fiddling while Rome burns?  And if so, is the modern day Nero the Greek politicians, various players in the Eurozone from Angela Merkel and Nikolas Sarkozy to the leaders of the European Central Bank, the IMF, or all of them put together?  (Photo left: Greek parliament, by PHKushlis, September 2006).

from Hurriyet Dailynews by HDN
Provided there is no further twist in the political maneuvering we have been witnessing in Greece during the last few days, Lucas Papademos, an American-educated banker, academic and former vice president of the European Central Bank (ECB), will take over as the head of an interim government which will lead the country to fresh elections, probably on Feb. 19. If that schedule is kept, it will be only two years since the last elections which brought the Socialist party of PASOK into power under George Papandreou.

from FT.com – World, Europe
Debt crisis has swept away George Papandreou barely two years after he came to office promising spending on pensions, health and education

from FT.com – World, Europe
The centre-right Popular party, led by Mariano Rajoy, is on course for a crushing victory and an absolute majority in the next parliament

from open Democracy News Analysis – by Marley Morris and Jonathan Birdwell
Populist movements pick up significant levels of support by presenting themselves as ordinary Joes who are honest and up-front about society?s problems. The most successful leaders are those that can embody this folksy outsider image

The road to Europe: defend the biosphere and stop punishing the innocent, Susan George

from open Democracy News Analysis – by Susan George
Imagine that the world is governed by concentric circles or spheres of power, with the most powerful one on the outside. Today the innermost circle is a neglected biosphere. We have to turn the paradigm inside out. The biosphere must come first.

from The European Citizen by Eurocentric
Last year I blogged about the European outlook of the Dutch government. With the Eurozone crisis still rumbling on, some of the faultline themes are well established: the degree of fiscal union and the role of the ECB, the core versus the perciphery, austerity versus stimulus, Eurozone members versus non-Eurozone members, etc. Apart from the left-right question of austerity versus stimulus, most of the major questions are about integration and institutions: how much do we integrate, how do we integrate, and what will be the consequences of integration. So a lot of the old instutitional debates are being revived in the background.

by Grahnlaw
Is it irony, or what? We are in the middle of a crisis of some proportions in the eurozone (population 332 million). There are widespread fears that the euro house of cards might crash in a near future if the assembly line of ?comprehensive solutions? continues to provide too little, too late.

by Grahnlaw
Yesterday evening the chairman of the Euro Group, Jean-Claude Juncker, held a press conference (recorded, including questions and answers 35:33), together with the Commission vice-president Olli Rehn and the EFSF chief executive officer Klaus Regling.

by Grahnlaw
Who is leading the fight against the crisis in the eurozone? Who is at the root of the problems? The so called market forces, the individual EU member states, Angela Merkel and Nicolas Sarkozy who have claimed leadership, the Frankfurt group, the Euro Group (17) and chairman Jean-Claude Juncker, the euro summits (17) and president Herman Van Rompuy, the Ecofin Council (all 27 member states) and the Council presidency (Poland), the European Council (27) and president Herman Van Rompuy, the European Central Bank and president Mario Draghi, the European Commission through president José Manuel Barroso and Ecfin commissioner Olli Rehn, the G20 and its members, or the IMF?

Democracy and the Eurozone Crisis

from The European Citizen by Eurocentric
There will no longer be any referendum in Greece on the new Eurozone deal, and a technocratic-led national unity government will take over before elections can be held in February. (And a good thing that there will be elections – Greece needs to confront its economic future in a way that the Greek people will buy into the responsibility of the decisions that need to be taken). Now that the referendum has been called off, it’s taken as a indictment of Europe that France and Germany could pressure Greece to drop the referendum by saying that the money will be withheld unless a referendum would return a positive result.

A macroeconomic overview of the Italian crisis

from Ideas on Europe by Protesilaos Stavrou
Despite all the discussion around the situation in Greece the real fires are burning elsewhere. Though under the current economic and political setting a disorderly default of Greece would be enough to tear apart the euro, the final blow to the single European currency can in fact be delivered by either its 3rd largest economy, Italy.