Republican circles are angry with the government who canceled celebrations due to Van earthquake.  Honestly i don’t understand why celebrations are cancelled as long as they are not luxurious… 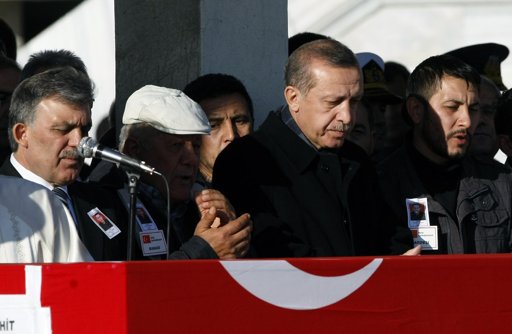 Turkey’s President Abdullah Gul, left, Prime Minister Recep Tayyip Erdogan, third left, and family members attend the funeral prayers for Yunus Yilmaz, one of 24 Turkish soldiers killed a day ago by Kurdish rebels at the border with Iraq, in Ankara, Turkey, Thursday, Oct. 20, 2011. About 10,000 elite Turkish soldiers were taking part in a ground offensive against Kurdish rebels in southeastern Turkey and across the border in Iraq on Thursday, making it the nation’s largest attack on the insurgents in more than three years, the military said. The offensive began Wednesday after Kurdish rebels carried out raids near the Turkey-Iraq border that killed 24 Turkish soldiers and wounded 18, the insurgents’ deadliest one-day attacks against the military since the mid-1990s.(AP Photo/Burhan Ozbilici)

Turkish troops have killed at least 49 Kurdish rebels in a valley near the Iraqi border, the military said Saturday, as hundreds of troops also pursued Kurdish fighters within northern Iraq.

The main opposition party revisited an in-party discussion over the Kurdish question with deputy leader Sezgin Tanrıkulu suggesting ?neutral citizenship? for all Turkish citizens without stressing any ethnic origin, which caused some reactions from his party fellows.

What is BDP’s formula for permanent peace?

Following the re-entry of the Peace and Democracy Party (BDP) into Parliament, a commission was set up for the new constitution, and the language of politics began to predominate.

Why is Turkey failing to fight terrorism?

For a country that has been fighting a terrorist organization for 30 years, it is really unacceptable to lose 24 soldiers in a single day to terrorism, as was the case in Hakkari?s Çukurca district on Wednesday.

The outrage in Turkey over the recent killings of 24 soldiers spilled over into the area of economics research and analysis yesterday, with the potential to hurt a major news agency, according to a report by the Gazeteport website.

It is possible to divide Turkey?s experiences in the Kurdish issue into a number of periods: First, the period of problems caused by primitive nationalization practices carried out in the first decades of the Republic; second, the regressive period from the 1960 coup until the 1980 coup; third, a complicated period from the emergence of the Kurdistan Workers? Party (PKK) through the chaotic 1990s until PKK leader Abdullah Öcalan?s capture in 1999.

The security summit held in parliament on 20 October was closed to the press “in order to talk about everything openly and precisely”. Prime Minister Erdoğan was going to meet representatives of the press later.

by MARKAR ESAYAN
Turkey is now finally coming close to getting rid of its post-1982 coup constitution. The constitution-drafting work is moving forward pretty well now. Political leaders and members of the constitutional commission are being careful not to send any negative messages to the public. They are doing so for a couple of reasons.

by İHSAN YILMAZ
A parliamentary commission set up to negotiate a new constitution is starting its deliberations today. The commission comprises an equal number of deputies from each party, and the pro-Kurdish Peace and Democracy Party (BDP) is also among them.

New constitution: Is it possible?

by İHSAN DAĞI
The people’s overwhelming demand for a new constitution has forced political parties to work together in Parliament. For this, a parliamentary commission consisting of four political parties, each with three members, was set up.

by ABDULLAH BOZKURT
The future of the ruling Justice and Development Party (AK Party) government will be determined by two separate but closely linked developments in Turkey, as will the future performance of the main opposition Republican People’s Party (CHP) in the next election. It is a no-brainer that the first and foremost point is the economy. The second is whether or not the ruling party can deliver the new constitution that everyone has agreed the country urgently needs and what position the CHP will take in this regard.

by Fréderike Geerdink
ISTANBUL (ANP) ? ?Our revenge will be great?, stated the Turkish president Abdullah Gül after PKK attacks in the country?s south east. The attacks on several police and army posts left 24 soldiers dead and 22 wounded. Turkish ground troops crossed the border with Northern Iraq for the first time since 2008 in pursuit of

The BDP already dissolved itself a long time ago

by MARKAR ESAYAN
The most serious development of last week was the police operation against the Kurdish Communities Union (KCK) in İstanbul. More than 100 people, including eight Peace and Democracy Party (BDP) mayors, were arrested.

Can Kurds rely on the Turkish state?

by ORHAN KEMAL CENGİZ
The Kurdish question and the positions of political parties with regard to the conflict are becoming increasingly confusing and complex with every passing day.

Constitution and the Kurdish quagmire

by DOĞU ERGİL
The Kurdish ?problem? of Turkey seems rather messy nowadays. The violence raised by the Kurdistan Workers’ Party (PKK), a group that came into being to carve an independent ?Kurdistan? out of Turkey, returned to this original aim after decades of vacillating between aiming for a ?democratic [pluralistic] republic? in Turkey, autonomous rule and a federal state.

How does the PKK recruit?

by EMRE USLU
As the National Police Department launches counterterrorism operations against the Kurdish Communities Union (KCK) — an umbrella organization of the Kurdistan Workers? Party (PKK) — which have led to the arrests of more than 150 members, including pro-PKK Peace and Democracy Party (BDP) deputies, some liberals in Turkey have launched a counterargument suggesting that the operations against the KCK would be a counter-effective and only serve to encourage Kurds to take to the mountains and join the armed struggle against the state.

by ISTANBUL – Anatolia News Agency
Foreign Minister Ahmet Davutoğlu briefed the co-chairs of the Peace and Democracy Party (BDP) on Oct. 7 on the latest foreign affairs developments, stressing that the strength of Turkish democracy was important for the whole region.

from open Democracy News Analysis – by Bora Isyar and Agnes Czajka
Turkey?s political leadership under Recep Tayyip Erdogan is projecting the country as a successful model of democracy for Arab states emerging from authoritarian rule. A closer look casts doubt on the claim, say Agnes Czajka and Bora Isyar.

The real danger for Erdoğan

from Today’s Zaman, your gateway to Turkish daily news :: Columnists by YAVUZ BAYDAR
I sat down yesterday to devote my entire column to explain what went wrong between the Assad regime and Ankara and how. But when I saw my friend Joost Lagendijk?s article here in this paper, I felt I must respond to his open and fully justified question.

by FATMA DİŞLİ ZIBAK
It seems that Republican People?s Party (CHP) leader Kemal Kılıçdaroğlu?s allegations that former Interior Minister and current Deputy Prime Minister Beşir Atalay was a ?mole? in the Deniz Feneri charity fraud case have only served to further damage his own credibility.

by Fehmi Koru
The past 10 years of the Justice and Development Party’s (AK Party) administration passed before my eyes as I watched Prime Minister Recep Tayyip Erdoğan deliver a speech in Ankara’s Kızılcahamam district to a crowd of party members, ministers and deputies.

by KLAUS JURGENS
Today the proud Republic of Turkey celebrates its 88th anniversary. While major events and festivities are usually held all across the country, this year’s Republic Day is different, as the nation still struggles to come to terms with the consequences of last Sunday’s devastating earthquake.

88th anniversary of the republic

by BERİL DEDEOĞLU
Today, we celebrate the 88th anniversary of the republic. This celebration is also marked by the effort to heal our wounds caused by various events. The commemoration of our republic’s foundation is an opportunity to think about our regime’s principles and practices. We must think about how much our republic has become a democracy as well. It’s a chance to think if the fight against terrorism will hinder the progress of our democracy. It is also a good time to question our institutions’ efficiency and governance failures.