There is still something annoying about this. I don’t know what exactly… remembering the fact that during the Spanish Civil War, those few Turks who fought there were pro-Franco…

Another photo of Turks from Hürriyet.

a relevant book:
http://www.berghahnbooks.com/title.php?rowtag=ArmbrusterTaking
An anthropological take on French riots in 2006.

Panic on the streets of London.

Vigilante groups aim to combat riots
www.independent.co.uk
Shop owners across London vowed tonight to do whatever it takes to protect their businesses as anger over the police’s inability to stop widespread looting pushes them towards setting up their own neighbourhood vigilante groups.

Anarchists are under attack because their ideas are gaining ground, Alasdair Thompson

from open Democracy News Analysis – by Alasdair Thompson
The London Metropolitan Police have withdrawn an appeal to the public to ‘report anarchists’. This incident is part of a state offensive against anarchism, driven by the fear that anarchist ideas are gaining ground amongst the younger generation in the UK

The last time Tottenham burned; the local MP Bernie Grant supported the local people and said “what they [police] got was a bloody good hiding.” How times change. 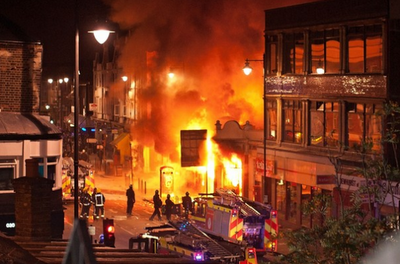 The last time Tottenham burned, the local Labour Party was quick to takes sides. ?The police were to blame for what happened,? announced council leader and later MP Bernie Grant. ?And what they got was a bloody good hiding?.

Panic on the streets of London, Laurie Penny 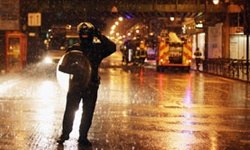 …across London in a second night of looting and disorder following riots in Tottenham.
from BBC News | Europe | World Edition – Aug 8, 2011

…of the riot that happened on Tottenham High Road in north London last night after a march to protest the killing of a local 29-year-old black man, Mark Duggan, who was shot by police marksmen on Thursday evening, has followed a predictable pattern. Burnt out cars lie in the road after riots on Tottenham High Road on August 7, 2011 in London. (P…
from anthropologyworks