Turkey’s Prime Minister Tayyip Erdogan (C) is flanked by Ground Forces Commander and acting Chief of Staff General Necdet Ozel (L) and Defense Minister Ismet Yilmaz (R) during a wreath-laying ceremony at the mausoleum of Mustafa Kemal Ataturk, founder of modern Turkey, in Ankara August 1, 2011. Turkey’s military and political leaders face a battle to restore order in NATO’s second-biggest army on Monday at a military council overshadowed by the resignation of its top four generals in protest at the jailing of hundreds of officers. REUTERS/Umit Bektas

After Military Resignations, How Emboldened is Turkey’s Erdogan? 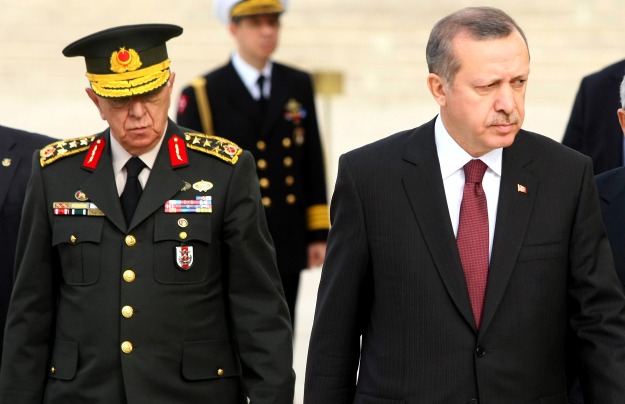 Turkey’s military brass has a long history of involvement in their country’s politics: The self-appointed defenders of Turkish secularism launched coups in 1960, 1971, 1980, and 1997 (the latter a so-called “post-modern” coup). But today, Turkey’s top generals stepped out of power, requesting early retirement from their posts en masse in the latest sign of tensions with the ruling Justice and Development Party (AKP).

from NYT > Turkey by By ANTHONY SHADID

As Turks grappled with the shock of the military resignations, critics warned of creeping authoritarianism engineered by Prime Minister Recep Tayyip Erdogan.

To claim that nothing has happened in Turkey, that developments are just normal, is of a big distortion of the reality.

A sharp turn in military-civilian relations

The possibility that Gen. Işık Koşaner, the Turkish Armed Forces? chief of General Staff, could resign had been a rumor in Ankara for sometime due to a difference of opinion with Prime Minister Recep Tayyip Erdoğan?s government over the recent arrests of a number of generals and admirals, as well as over the figures that would replace them.

The Hürriyet Daily News is providing expert analysis of the standoff ahead of a key Supreme Military Council.

Ensuring civilian control over the military is the indispensible task of all “democratic” governments in today’s world.

President, gov’t rule out a crisis, describe resignations as normalization

The resignations of Turkey?s upper military echelon will not precipitate a crisis within the state, Turkey?s president and government members suggested Saturday, describing the developments as evidence of the normalization of civil-military ties.

The latest round in the tension between Turkey?s elected politicians and overbearing generals ended with four resignations on the latter side, implicitly declaring one thing.

by FATMA DİŞLİ ZIBAK
A mini terror summit hosted by Prime Minister Recep Tayyip Erdoğan in Ankara on Tuesday where Erdoğan, a number of ministers and Chief of General Staff Gen. Işık Koşaner talked about the investigation of an outlawed Kurdistan Workers? Party (PKK) attack in Diyarbakır?s Silvan district that left 13 soldiers dead earlier this month led to comments that Turkey is adopting a new strategy in its fight against terrorism.

by Hürriyet Daily News
The European Parliament?s main Turkey rapporteur is unaware that Turkey?s democracy is going backwards, Turkey?s main opposition party has said, criticizing Ria Oomen-Ruijten for saying that the country had become more democratic with the Friday resignations of top generals.

by Hürriyet Daily News
The resignations of Turkey?s four highest-ranking commanders will not precipitate a state crisis and are instead evidence of the normalization of civil-military ties, Turkey?s president and government members have suggested, even as the opposition blamed the government for developments.

by Radikal
Turkey?s new chief of General Staff, Gen. Necdet Özel, is known for his congenial stance toward the government and its policies, according to reports.