Democratic Opening, Kurdish Opening etc are all gone. Now it is time to re-active the 90s’ special police forces. Turkish Military had demanded them to stop back in the late 90s as police forces would become a rival to the Army forces. Now they are all coming back… Kurdish issue looks like a pretext…

AKP’s new charter plans have no room for opposition: CHP

Two non-commissioned officers and one specialist sergeant were killed in an armed conflict in the night from 23 to 24 July in Mardin in south-eastern Turkey. A large-scale military operation was launched in the region.

The ruling Justice and Development Party, or AKP, announced Friday that it has begun preparations for a new constitution by forming a nine-member committee that will focus on both the methodology and content of the reform.

by ISTANBUL – Daily News with wires
The Democratic Society Congress, or DTK, declared ‘democratic autonomy’ during an extraordinary congress with 850 delegates in Diyarbakır on Thursday.

by DOĞU ERGİL
Just as Abdullah Öcalan, the leader of the armed Kurdistan Workers’ Party (PKK), was striking a deal with the Turkish establishment to finalize the biggest peace accord ever between the Kurds of Turkey and the government, a group within the PKK sabotaged peace efforts by capturing soldiers and officials, assassinating plainclothes military personnel on the street and finally killing 13 soldiers in an ambush.

from Hurriyet Dailynews by ANKARA &#8211; Hürriyet Daily News
The only place for Turkey?s main pro-Kurdish party to discuss its desire for ?democratic autonomy? is Parliament, according to a senior minister, who indirectly called on the party to end its boycott and return to Ankara. 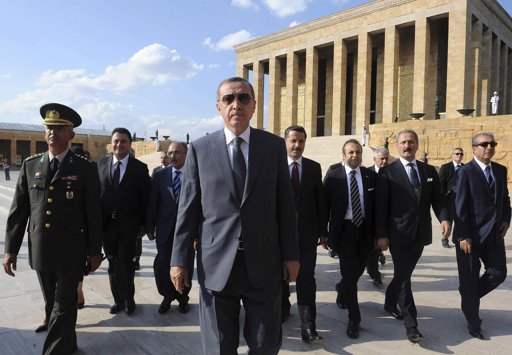 Turkey’s Prime Minister Tayyip Erdogan (C) and new cabinet members visit Anitkabir, the mausoleum of modern Turkey’s founder Ataturk, in Ankara July 13, 2011. Erdogan’s government won a confidence vote on Wednesday to push ahead with plans for a new constitution, but a parliament boycott by Kurdish lawmakers has soured his calls for cross-party consensus. REUTERS/Stringer

by ORHAN KEMAL CENGİZ
Abdullah Öcalan declared that an agreement had been reached to set up a ?peace council.? Öcalan was referring to the negotiations between the government and himself in this declaration.

Tension Continues after Clashes in Silvan

from Bianet :: English
Attacks against Kurdish citizens and members of the Peace and Democracy Party are still continuing after 13 soldiers died in an armed conflict in Silvan one week ago. In Erzurum, 500 people assaulted 200 Kurdish workers. In Zeytinburnu, BDP members were attacked.

BDP calls on gov’t to probe cause of fire

by ANKARA- Hürriyet Daily News
Turkey?s main pro-Kurdish party has called on the government to investigate allegations that 13 soldiers killed Thursday died as a result of bombing by Turkish aircraft rather than a terrorist ambush.

The Turkish government: The lofty Mr Erdogan | The Economist

Only one woman minister in Turkey’s new cabinet (SETimes.com)

from Today’s Zaman, your gateway to Turkish daily news :: Columnists by YAVUZ BAYDAR
In dealing with the so-called ?boycott of Parliament,? Prime Minister Recep Tayyip Erdoğan once more reminded his adversaries that he needs much more sophisticated opposition in order to be pushed into a corner.

The Supreme Board of Judges and Prosecutors (HSYK) has appointed an Ergenekon judge to a Bolu court as a form of, what it called, ?disciplinary punishment.? A statement released by the HSYK on Wednesday said Köksal Şengün, formerly a presiding judge

by Hasan Cemal Milliyet
The pro-Kurdish Peace and Democracy Party (BDP) has certainly made mistakes, but the ruling Justice and Development Party (AK Party) was also erroneous in its attitude, which was proclaimed by senior AK Party executives saying, ?We will solve the Kurdish issue whether the BDP comes or not.?

from Hurriyet Dailynews by ANKARA- Hürriyet Daily News
Parliament Speaker Cemil Çiçek steps in to solve the oath crisis and brings together the pro-Kurdish Peace and Democracy Party, or BDP, officials and the ruling party officials. The BDP?s suggestion to change the Anti-Terror Law and a return path for jailed deputies will now be reviewed by PM Recep Tayyip Erdoğan

AKP leaves the table, oath decision up to BDP

by ANKARA- Hürriyet Daily News
Negotiations between the ruling Justice and Development Party, or AKP, and the pro-Kurdish Peace and Democracy Party, or BDP, have hit a roadblock after the former rejected the latter?s consensus text to bring its deputies to Parliament.

The unilateral declaration of Kurdish autonomy in Turkey was greeted with deadly silence. The world couldn?t care less.

Few of us may realize it, but 850 delegates from North Kurdistan recently declared democratic autonomy in Amed (Diarbakir), proclaimed as the capital of North Kurdistan. They invited all Kurds to regard themselves as Kurdistani citizens. The area the autonomy claims constitutes a substantial portion of southeastern Turkey.”