Those "jazz lover- white Turks" who booed and stopped Aynur Doğan, the Kurdish singer, are the very source of Turkey's many social problems. In terms of democratic rights they are not different and mostly worse than AKP government whom they hate with their fullest vigor. Based on being a citizens in this country for ages, I am definitely sure that those protesters are the biggest hypocrites. I don't believe they really care about the 13 fallen soldiers. Most of them will use their connections to place their relatives in less dangerous stations in military service when time came, or comes… Despite their civilized, educated, westernized outlook, they are full of hatred to all those subaltern classes. They are not really against terrorism but they are against Kurdishness itself and they used a terrorist act to justify their hatred. Beware of these assholes, they are ready to attack, they are ready to plot for crimes of hatred and they have to stopped…. In all over the country, one should check out the "local notables"- local versions of nationalist Turks spreading ethnic hatred… 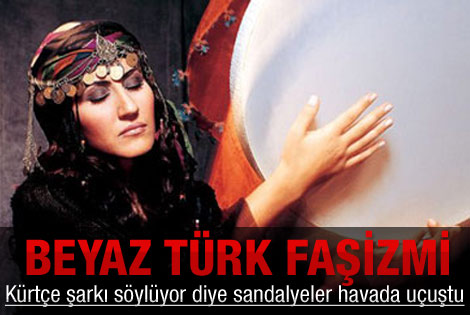 A Harbiye Concert and The Kurdish Issue

from Bianet :: English
During the "Women of Water" concert, friday night at Harbiye's Open Air Theatre, a group of Turks protested against Kurdish singer Aynur for singing in Kurdish. She was forced to cut her performance short and left after the third song.

from Hurriyet Dailynews by ISTANBUL- Daily News with wires
Renowned Turkish-Kurdish singer Aynur Doğan was forced to leave the stage Friday night by concert-goers who were angered by her songs in Kurdish. 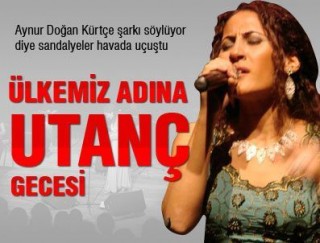 Pain that blinds, rage that diverts

from Today's Zaman, your gateway to Turkish daily news :: Columnists by YAVUZ BAYDAR
This summer threatens to be another one marred by pain and outrage. The killing of 13 soldiers in Silvan by the Kurdistan Worker's Party (PKK) and the hasty declaration of “democratic autonomy” by the Democratic Society Congress (DTK), a local wing of the PKK, were the types of acts that many feared as the worst possible to derail the process for peace.

from Hurriyet Dailynews by ISTANBUL – Radikal
Kurdish singer Aydun Doğan received protests from the audience at a jazz concert on Friday for singing in Kurdish. While Doğan said the festival organizers invited her for her songs in Kurdish, others condemned what happened, saying that many people direct the anger they feel at the PKK toward all Kurdish people.

In other social news:

by ISTANBUL – Daily News with wires
The removal of a symbolic monument in the eastern province of Elazığ to make way for new road construction has angered the municipality assembly and union members.

Quote of the Week: “Miniaturk and representations of Turkish history” by Ipek Türeli

No cola in school canteens this year

by HDN
In an effort to encourage students to have a balanced diet and to prevent obesity, Turkey’s Health Ministry and the Ministry of Education have launched a program for the 2011-2012 term.