Parliament of firsts to open with boycott

by ANKARA Hürriyet Daily News
For the first time in the history of the Turkish Republic, Parliament?s General Assembly is beginning a new legislative term with boycotts and missing members.

The Kurdish problem is no joke

by HDN
The newborn political crisis, which was triggered by the decision of the Supreme Election Board, or YSK, to strip some new elected MPs of eligibility to join the Parliament, cannot simply be explained away by ?carelessness? of the judiciary.

from Bianet :: English
The release of independent deputies of the Labour, Democracy and Freedom Block, among them Hatip Dicle, was rejected. The police massively demonstrated against political protestors in Istanbul. More than 20 people were taken into police custody, many were injured.

by Tarhan Erdem Radikal
In the first speech he delivered after his party?s election victory, AK Party leader Erdoğan said: ?Let me be frank. Today, the AK Party is debating about why 50 percent of our nation did not vote for us, rather than debating why 50 percent voted for us.?

Gül calls for calm on the eve of a key week

by ANKARA- Hürriyet Daily News
Opposition anger that their MPs have not been freed from jail can only be assuaged by attending Parliament?s opening session, the president says.

from open Democracy News Analysis – by Nora Fisher Onar
The result of Turkey’s election creates a vital need to put the country’s relationship with the European Union at the centre of both partners’ concerns. What is at stake is the historic mission of reconciling secularism, democracy and Islam, says Nora Fisher Onar.

by Hürriyet Daily News
An Istanbul court has ruled to prevent the release of two prisoners who were elected to Parliament earlier this month.

by FATMA DİŞLİ ZIBAK
The Supreme Election Board (YSK), which prior to the elections attempted to bar seven Peace and Democracy Party (BDP)-backed independents from running in the general elections of June 12 due to their past convictions for terrorism-related crimes, early this week stripped BDP-backed independent Hatip Dicle, who was elected to Parliament from Diyarbakır, of his right to hold office.

by FATMA DİŞLİ ZIBAK
Turkey, which was expecting to see some calm following the general elections held on June 12, has been seeing increased tension again with the judicial controversy surrounding the deputy posts of some suspects in ongoing cases.

from Kamil Pasha by Jenny White
The candidates for the pro-Kurdish Peace and Democracy Party entered the election as independents in order to be able to get into parliament since the party was unlikely to meet the 10% threshold. 36 members of the party were elected. One of these, MP Hatip Dicle, representing Diyarbakır, was just denied  the right to take her place in parliament by Turkey?s electoral board because she is being investigated for ties to the PKK. She is being held in prison during the ongoing investigation (as are two CHP deputies as part of the Ergenekon investigation; their release is imminent).

Remember the YSK?s decision on independent candidates during the pre-election period? Turkey experienced many tense days following this decision.

AK Party not BDP can solve the crisis

by Cengiz Çandar Radikal
Is it very difficult to see that the Supreme Election Board?s (YSK) decisions and the ?stagnant? state of the ruling party, which came to power by receiving 50 percent of the vote in the country, will cause casualties and unnecessary turmoil?

‘This is Turkey; there is no way out of here!’

by HDN
I no longer am angry at the Supreme Election Board, or YSK, or criticize the judiciary for those decisions that are different than each other.

CHP non-committal on boycott amid row over disqualified deputies
Today’s Zaman
Courts have separately refused to release two elected candidates from the main opposition Republican People’s Party (CHP) and one from the Nationalist Movement Party (MHP) who face charges in connection with two subversive plot cases, Ergenekon and

by YAVUZ BAYDAR
We now step into a week full of promise with regard to either productive or destructive disorder. A series of judicial decisions have driven politics into a severe deadlock. Nine deputies have been prevented from joining the new Parliament as a result of interpretations of the Constitution and legislation. Not only have we re-experienced a judiciary defining the course of politics — countering normalization — but we have also encountered a unique situation where all four parties are hostage to each other.

by ÖMER TAŞPINAR
As unexpected domestic problems accumulate, particularly on the front of Kurdish parliamentary representation, it is certainly understandable that foreign policy is relatively absent from Turkey?s busy agenda.

Where are politics in this picture?

by MARKAR ESAYAN
There are a number of definitions of politics. However, for me, the primary meaning of politics is civilianization and liberalization. By it nature, politics involves pluralism, communication and consensus.

What?s next for Turkey?

by ŞAHİN ALPAY
On June 12, Turkey held an election practically with no losers, as I argued in a previous column. Despite the immediate crisis created by the Supreme Election Board?s (YSK) decision to annul the election of Hatip Dicle, an independent supported by the pro-Kurdish Peace and Democracy Party (BDP), and the court refusing to release several members of Parliament elected while in detention, hopes are high that Parliament, to convene this week, will be able to tackle the problems that confront the country with the strength of its mandate.

by ACTURCA
The Hindu (India) June 15, 2011
Atul Aneja
Turks in their millions headed for the polls on June 12 to participate in a crucial parliamentary election which is likely to have a strong bearing on not only the country?s immediate future but also on millions outside, who are in the midst of an ?Arab Spring.? Capturing the spirit of a series of bold pro-democracy uprisings in West Asia and North Africa, the Arab Spring promises to liberate vast multitudes in the region ? from a stifling era of authoritarian rule. 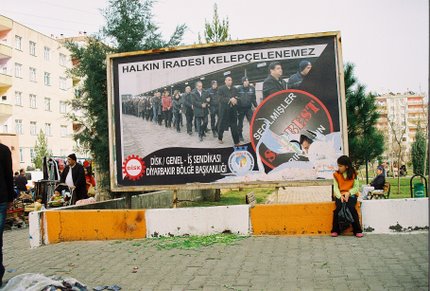