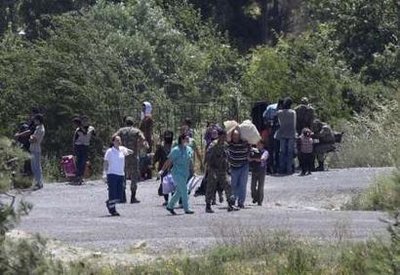 People cross into Turkey as they carry their luggage in a rural area on the Turkish side of the border zone between Syria and Turkey, near the Turkish? Read more »REUTERS/Osman Orsal

from World news: Turkey | guardian.co.uk by Martin Chulov, Nidaa Hassan
Heavy shelling and gunfire has rocked the Syrian town of Jisr al-Shughour, two days into a military assault that has caused more than 5,000 refugees to flee into neighbouring Turkey.
The continued assault suggests some groups in the town are resisting the armed forces as the regime tries to crush a sustained challenge to President Bashar al-Assad.

from Today’s Zaman, your gateway to Turkish daily news :: Columnists by YAVUZ BAYDAR
The ?Arab Spring,? quite contrary to other ?springs? elsewhere, like in Eastern Europe, has its strong elements of nightmares, bloodbaths and horror mixed with hope and civilian resolve. This has been the case with Syria. Three months into the endless unrest, we are now at a new stage, with an influx of refugees fleeing death and destruction to Turkish soil.

from Yahoo news
More than 4,000 Syrians have fled to Turkey to escape a crackdown on protests against President Bashar al-Assad and thousands more are sheltering near the border, officials and activists said Saturday.

by By SEBNEM ARSU and KATHERINE ZOEPF

The Turkish government said Thursday that it is planning to build a second camp to house Syrian refugees, after 1,050 more people crossed the border over the last 24 hours.

from NYT > Turkey by By SEBNEM ARSU and LIAM STACK
Syrian military forces stormed through villages in the northwest on Friday, opening fire on residents in a deadly sweep toward the town of Jisr al-Shoughour.

Syrian refugees in Turkey: ‘People see the regime is lying. It is falling apart’

As the blood from a gunshot wound oozed down his right thigh, Abu Majid shook his fist: “You know what dictatorships are like in the Middle East,” he said. “Syria was the strongest of them all, like an iron ball. Well it isn’t any more.”
Turkey-Israel concert for religious tolerance canceled due to IHH pressure
Ha’aretz
‘Three Religions’ concert to be held in Istanbul canceled at last minute after IHH and other Islamic organizations claim Israel participation in event ‘unacceptable’ and a ‘provocation’. By Haaretz Service Tags: Israel Turkey Gaza flotilla Gaza

The Sultan of Istancool: Is Erdogan’s Success Pulling Turks Away from Europe? – SPIEGEL ONLINE – News – International

Turkey as a model of democracy and Islam, Sami Zubaida

from open Democracy News Analysis – by Sami Zubaida
Democracies are about more than elections and majorities: they require genuine separation of powers, autonomous institutions and associations, all regulated by the rule of law. The current Turkish situation is the product of social and institutional patterns, now in question, in which multiple centres of institutional power confronted and checked one another, unlike the centralised and personalised regimes of much of the Arab world.

Erdogan, Europe and the Ottomans? Libyan Hang Over

from WhirledView
By Patricia H. Kushlis
?The past is never dead.  It?s not even past.? William Faulkner
On May 3, 2011 Turkish Prime Minister Recep Tayyip Erdogan finally told Muammar Gaddafi that enough was enough and it was time for him to leave. To date, Erdogan?s public pronouncement has had as much influence on the tone deaf Gaddafi as similar ones weeks earlier by President Obama, Secretary of State Hillary Clinton and a host of European and Middle Eastern leaders.
Or South African President Jacob Zuma’s latest fruitless mediation efforts in Tripoli.

Abstruse. But that?s enough, we are in the 21st century.

from Blogactiv by cem
This current article is the English version of my previous article that was published June 1st 2011. Nevertheless, I added one sentence about a mistake made by Tageszeitung that I should have introduced through the Turkish version. The article below of ABhaber explains the bankruptcy of Greece: Tageszeitung: Greece is a bankrupt country for evermore Here are some translated extracts:

from World news: Turkey | guardian.co.uk by Helen Pidd
In recent years Turkey’s foreign minister Ahmet Davutoglu has won admiration and derision in almost equal measure for his policy of “zero problems with the neighbours”.
But as Turkey prepares to greet an influx of refugees from Syria, whose President Bashar al-Assad continues to ignore Ankara’s pleas for reforms, observers argue the uprisings in Syria and across the Middle East have tarnished Turkey’s self image as a regional power broker.

from Kamil Pasha by Jenny White
An interesting interview with the Istanbul-based journalist Claire Berlinski. (click here for the full interview) Below is an excerpt of Berlinski?s views on Turkey?s misguided view of Iran, followed by views on the PKK:
?Claire Berlinski: The AKP?s senior figures grandly imagine themselves as the heirs to Ottoman statesmen. They promote this understanding of their behavior at every opportunity. ?You forget,? many an AKP spokesman has said to me, ?that we?ve been in this region for years. We know it better than you do. Trust us.?