Just had breakfast with the family. My parents already voted. Now I and my sister is to leave home to vote. Then I intend to start special election coverage here:) 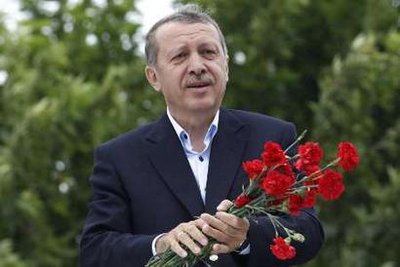 Tayyip Erdogan, Turkey’s prime minister and the leader of the Justice and Development Party (AKP), throws flowers to his supporters during an election rally in Istanbul June 11, 2011. Turkey will hold parliamentary elections on June 12.REUTERS/Murad Sezer

from World news: Turkey | guardian.co.uk by Bora Isyar
The ruling party, which is expected to win elections on 12 June, needs to work with elements from across Turkish society
Turkish voters go to the polls this Sunday in an election that is being closely watched all over Europe. More than 40 million voters will take part in determining the complexion of the Turkish parliament for the coming four years.

A Successful Diplomat Tries His Hand at Politics in Turkey

from NYT > Turkey by By ANTHONY SHADID
The Turkish foreign minister, Ahmet Davutoglu, is running for a seat in Turkey?s Parliament for the first time, in one of the country?s more compelling races.

from Yahoo news
The suspense over Sunday’s vote centers on Prime Minister Recep Tayyip Erdogan, and whether his party makes enough gains to solidify his status as leader. Turkish voters head to the polls Sunday for critical parliamentary elections that will likely shape the country’s constitution, its conflict with a restive Kurdish ethnic minority and its definition of citizenship.

from World news: Turkey | guardian.co.uk by Helen Pidd
From a five-storey billboard on the Tarlabasi Boulevard in downtown Istanbul, Turkey’s prime minister is making some typically bombastic promises. Vote for me, says a shirt-sleeved Recep Tayyip Erdogan, and the traffic-congested megalopolis will be rewarded with a third airport and a third bridge across the Bosphorus.

from Hurriyet Dailynews by ANKARA – Hürriyet Daily News
Trying to secure its third term in power, the ruling party began its campaign at a slower tempo compared to its top rival, the main opposition Republican People’s Party.

Every vote is important in this crucial election

from Hurriyet Dailynews by HDN
I want to express my firm conviction that this election will indeed be a landmark for the shaping up of a new Turkey. For the better or for the worse…

from Hurriyet Dailynews by ISTANBUL – Hürriyet Daily News
Academic Gün Kut argues that the ruling AKP has not altered Turkey’s foreign policy, but instead continued along the general multidirectional line that has been endorsed since the Cold War. ‘I cannot share some of the unmerited criticism of the AKP but I equally object to the AKP’s arguments that everything started after they came to power. I say most of the AKP’s policies are the continuation of a line that has been endorsed prior to 2002, starting as early as 1989,’ he says

from Changing Turkey in a Changing World by Changing Turkey
Washington, DC ? (International Republican Institute) IRI?s third Turkish public opinion survey of the year, conducted between December 18, 2010 and January 4, 2011, shows that the electorate continues to be optimistic about the direction of the country but also reveals lingering concern over unemployment.  Fifty percent of respondents believe that Turkey is headed in the right direction.  While 43 percent of those polled said the economy was better than it was five years ago, only 27 percent thought that their family?s economic situation had improved, down from 34 percent in October 2010.