by Yigal Schleifer
With the Turkish elections set for Sunday, I’ve asked Aengus Collins, the man behind the very intelligent and informative “Istanbul Notes” blog to answer some questions about the vote’s significance. His answers are posted below. In return, he sent me a series of questions about the election, and has posted my answers over on his blog. You can find those answers here. 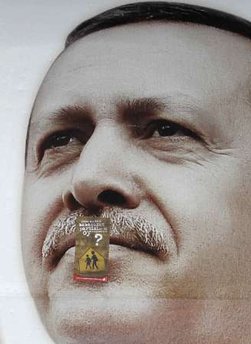 Turkey’s Communist Party sticker is pasted on the mouth of Turkey’s Prime Minister Tayyip Erdogan on an election campaign banner in Istanbul June 10, 2011. Turkey will hold parliamentary elections on June 12. The small banner reads “Do you still vote for your father’s party? Students from Turkey’s Communist Party”. REUTERS/Murad Sezer

from open Democracy News Analysis – by Kerem Oktem
A near-decade of rule by strategic, business-friendly, moderate Islamists has transformed Turkey?s political dynamics. Now, the prospect of a third successive electoral victory seems to offer the Justice & Development Party (AKP) a chance to consolidate its hegemony over the once entrenched military-led ?deep state?. But the situation is not so simple for the AKP, nor so clear for Turkey?s future. Rather, increasing domestic tension and regional turbulence are posing critical new questions over the country?s democracy and model of governance, says Kerem Oktem.

VIDEO: Turkey elections: What you need to know

from BBC News | Europe | World Edition
Selin Girit from the BBC’s Turkish service asks what is at stake in this Sunday’s general elections.

Turkey: Eyes on a higher prize

from FT.com – Analysis
A record of rapidly growing national prosperity is set to win the neo-Islamist AKP a third term ? but the size of its majority will be crucial to a planned constitutional overhaul 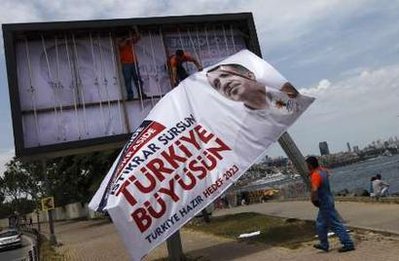 by ORHAN KEMAL CENGİZ
In response to questions from foreigners about what has been going on in Turkey in recent times, I refer to the recent events of April 24.

All indications are so far pointing to a clear and decisive victory for the Justice and Development Party (AKP) in the June national elections. 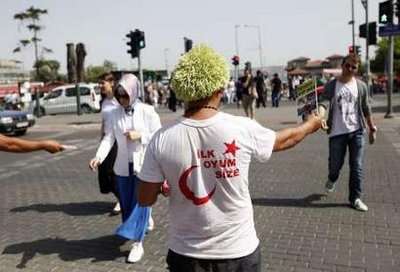 A volunteer of Turkey’s Nationalist Movement Party (MHP), wearing a T-shirt bearing the Turkish crescent and star and a slogan reading: “My first vote to you”, distributes leaflets as part of his party’s election campaign in Istanbul June 9, 2011. Turkey will hold parliamentary elections on June 12. REUTERS/Murad Sezer

by Turkish Digest
“Turkey: EU membership is distant concern for Turkish voters
Turkey’s EU bid has been largely absent from the campaign ahead of Sunday’s general elections, mirroring a dwindling Turkish confidence in the bloc as membership talks linger at a standstill.”

Prime Minister Erdogan has been an economic modernizer, but he’s never been comfortable with criticism or shared power.

from Hurriyet Dailynews by HDN
Turks know all about tactical voting, a possible explanation as to why support for the MHP doesn’t seem to have dropped despite the sex-tape scandal.

‘We would have hung Öcalan,’ Turkish PM says

from Hurriyet Dailynews by ANKARA – Hürriyet Daily News
PM Erdoğan has hit back at claims that his ruling party is negotiating with the main pro-Kurdish party over the release of imprisoned terrorist Abdullah Öcalan.

from Hurriyet Dailynews by HDN
The Economist is lucky not to be within the reach of Turkish tax controllers. The article on Turkish general elections might have cost the newspaper a good couple of billion dollars.

from Hurriyet Dailynews by ANKARA – Hürriyet Daily News
The main opposition party is considering whether to take the government to court on its vow to introduce a new Cabinet model, alleging that the plans are unconstitutional.

from World news: Turkey | guardian.co.uk by Helen Pidd
Prime minister Recep Tayyip Erdogan accused of failing to remedy Kurdish-Turkish conflict
Turkish Kurds have threatened a campaign of civil disobedience after Sunday’s national elections if the new government does not address their demands for more language rights and autonomy.
Altan Tan, a key Kurdish politician, said relations between the ruling Justice and Development party (AKP) and Turkey’s large Kurdish minority were at a nadir. He blames the prime minister, Recep Tayyip Erdogan, for failing to keep a promise to find a political solution to the bloody Kurdish-Turkish conflict during his eight years in office.

Gauging the likely impact of Sunday?s election in Turkey

from istanbul notes by Aengus Collins
Ahead of Turkey?s parliamentary elections on Sunday, Yigal Schleifer, who maintains the must-read Istanbul Calling blog, is making a guest appearance here to answer a number of my questions about the likely impact of the poll. In return, you?ll find my responses to a series of Yigal?s questions over on Istanbul Calling.