An editorial published by the The Wall Street Journal on Thursday has likened PM Erdoğan to former Malaysian PM Mahathir Mohamad, who is known for his anti-Semitic rhetoric.

Turkey’s EU minister rejects accusations of ‘autocratic tendency’
Today’s Zaman
When the police detained two journalists in April in one of these investigations — into a clandestine network of state bureaucrats, eminent civil society figures and criminal elements called Ergenekon — critics said this was the latest example of.. 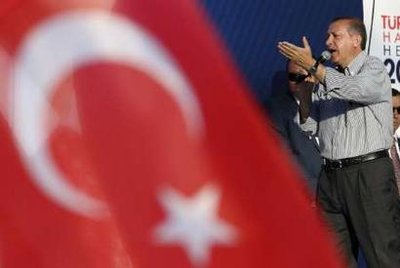 Turkey’s Prime Minister Tayyip Erdogan addresses his Justice and Development Party (AKP) supporters during an election rally in Istanbul, June 5, 2011. Turks vote in a an election on June 12 with confidence boosted both by having one of the world’s fastest growing economies, and by belief that their democracy has finally consigned military coups to the past. REUTERS/Osman Orsa

The party of Prime Minister Erdogan is expected to do well in parliamentary elections on Sunday, returning him to a third term. But it’s hardly business as usual in Turkey.

Turkey after the Elections: Implications for U.S. foreign policy | The Heritage Foundation

Adrian Hamilton: It’s not undemocratic to want a third term
The Independent
Having won two successive elections, in 2002 and 2007, and taken on the shadowy military networks of the Ergenekon or “Deep State” which caused so much fear and oppression in the past, the Turkish Prime Ministers is showing signs of impatience with any

AKP has become another mainstream party

Under normal circumstances, the ruling AKP should be negatively affected from its recent image, which contradicts with its initial message.

VOA Turkish Service’s Baris Ornarli’s exclusive interview with the leader of the Republican People?s Party of Turkey, the main challenger of the ruling Justice and Democracy Party in Sunday’s parliamentary election.” 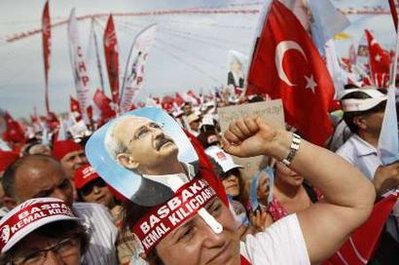 A supporter of Turkey’s main opposition Republican People’s Party (CHP), with a picture of their leader Kemal Kilicdaroglu attached to her head, reacts during an election rally in Istanbul June 4, 2011. Turkey will hold parliamentary elections on June 12. REUTERS/Murad Sezer

Selective religious freedom is not freedom: The Turkish Case

How can those who seek to enforce, rather than only embrace, the strictest interpretation of their own faith ever be at peace with other faiths, or with agnostics or atheists? 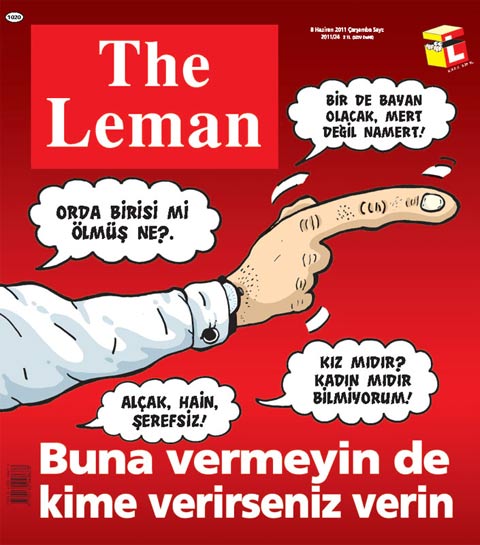 Take a break for a short tutorial on Turkish politics

As minor as it may be in the scheme of things, a breath of innovation known as www.oypusulasi.org deserves a moment of readers? attention. It translates as ‘vote compass.’

Shall we have a just and fair election?

Still, no one can claim of election fraud in this country where the biggest fraud indeed is an official ten percent national electoral threshold.

The main opposition might not get enough votes to come to power, but it will definitely get enough ‘to break the ruling party’s arrogance,’ supporters said Saturday.

The Kurdish issue before the elections

Abdullah Öcalan, the imprisoned leader of the PKK, loves to assert at every available opportunity that separation from Turkey has never been on his agenda.

An economist supports the Economist!

In this biutiful country of ours, we do not have the wonderful Anglo-Saxon tradition of the press publicly endorsing political parties before elections.

The hope of the CHP

Like in every Turkish election rally, there was a sea of flags. This time, last Saturday, they were the red flags of the CHP, the Republican People?s Party, and blue flags with the portrait of the party?s leader, Kemal Kilicdaroglu. CHP supporters waved their flags to the rhythm of the music played. Stimulating election songs, […]

Erdogan’s winning hand
Aljazeera.net
Over the past four years, several hundred journalists, academics, politicians and military officers have been jailed as part of an investigation dubbed ‘Ergenekon’, allegedly a secret secular nationalist organisation with the objective of toppling the

I am not entirely sure how familiar the Turkish public is with this prestigious magazine, but I am certain that most people probably do recognize it. However, Turkish political culture is definitely not familiar with the practice of a newspaper or magazine stepping forward and actually saying ?vote for this party? or ?don’t vote for that party.?

Is it the AK Party or the CHP in İstanbul?

The fate of every election is set in İstanbul. This is the reality: The party that wins the election in İstanbul comes to power.

April 27 e-memorandum should be prosecuted

A recent news report published in the Zaman daily has attracted a great deal of attention. According to the said report, a document in the DVD no. 51 seized in the office of Ergenekon suspect Col. Levent Göktaş gives important details on what had happened during the process starting from the ?367 decision? by the Constitutional Court in 2007 to the April 27 e-memorandum. The ?confidential? document reveals that the then-ground forces command Gen. İlker Başbuğ sent his advisor Nuran Yıldız to the party leaders in an attempt to manipulate the presidential election process; according to the document, he told the Motherland Party (ANAVATAN, formerly ANAP) leader Erkan Mumcu, ?We have talked to the Constitutional Court; they will dissolve the [Justice and Development Party] AKP; the military will interfere in the event that either Erdoğan, Gül or Arınç are elected president. We promise a new structure and setting.?

Turkey has entered the final countdown to parliament elections set to be held on June 12 as the ruling Justice and Development Party headed by Prime Minister Recep Tayyip Erdogan and the main opposition Republican People’s Party staged massive rallies in Istanbul at the weekend. 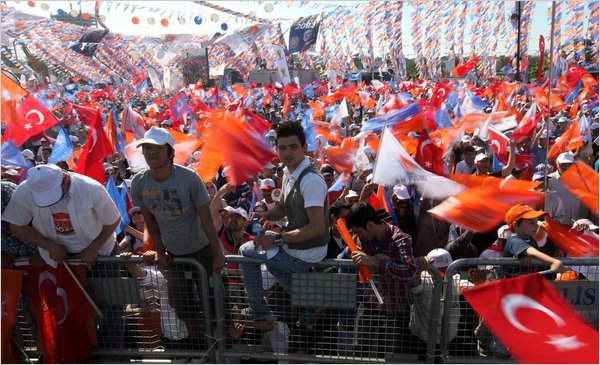 Supporters of the governing Justice and Development Party, known as A.K.P., during an election rally in Istanbul. A recently passed constitutional amendment has lowered the candidate eligibility age to 25, putting the country’s largest single age group in the running for the first time.

Turkey is no stranger to name-calling and over-heated rhetoric, especially in the final days before a national election.

by Turkish Digest
“PM Erdogan Gets High Marks for Foreign Policy
On Eve of Elections, a More Upbeat Mood in Turkey
Survey Report

As Turks prepare for national elections on June 12, they are increasingly upbeat about the direction of their country. And at a time when publics around the world generally remain gloomy about their economies, Turks are becoming more positive. This bodes well for Prime Minister Recep Tayyip Erdogan and his ruling Justice and Development Party (AKP), whom most observers believe will win a decisive victory in the elections.”

Kemal Kilicdaroglu has moved the CHP leftwards in a bid to broaden its appeal, and says the ruling AKP can’t be trusted.

In reversal of Turkey’s old order, relatives of military brass lobby for their …
Washington Post
By AP, ISTANBUL ? Burcu Kutluk, the daughter of a retired admiral in the Turkish navy, never got involved in the street protests that she witnessed when she was a student, believing they would have little impact. She thought: What’s the point of