Skip to content
CHP leader announced his arguments on headscard thru his Twitter account. MHP leader Devlet Bahçeli also joined Twitter. the President has already been active. PM Erdoğan seems to be leading the unfriendly camp against Twitter (and Web culture in general). 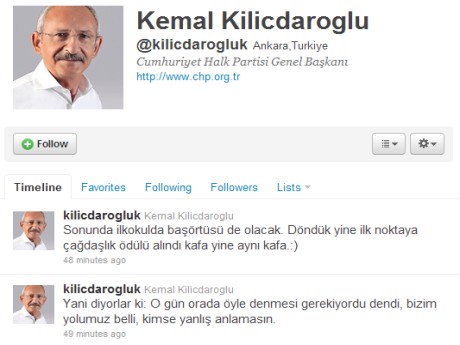 Superonline hails ‘the age of fiber’ in Gaziantep

from Hurriyet Dailynews
Superonline, Turkcell?s profitable fiber-optic network arm, has doubled investments in its infrastructure to expand its network to neighboring countries. Speaking in the southeastern city of Gaziantep, which the company is attempting to transform into a ?digital city,? Superonline General Manager Murat Erkan says the ?age of copper? is over and the fiber age has arrived
******************************

Can the CHP abandon being a state party?

by ORAL ÇALIŞLAR- RADIKAL
It would not be an injustice to the CHP to define as a state party a party that bears the name of the public in its name.

What effect will the CHP battles have on its voters? by ÖMER ÇAHA

With a split in its leadership cleaving the Republican People?s Party (CHP) in two, one of the main steps in the expected showdown in the party has now taken place.

There are few things more valuable in politics than the capacity to surprise. With this in mind, recent events within Turkey?s main opposition party, the Republican People?s Party (CHP), mark a potentially important moment in the career of party leader Kemal Kılıçdaroğlu. His ousting of the party?s secretary general, the unreconstructedly old-school Önder Sav, was unexpectedly swift, decisive and direct. As a result, many voters will be adjusting upwards their assessment of Mr Kılıçdaroğlu.