The doyen of Turkish cartoonists, Turhan Selçuk dies in Istanbul early this morning March 11, 2010 at 01.30 h at Acibadem Maslak Hospital where he had two operations since he was hospitalized on March 7. He was one of the three founders of the Association of Cartoonists in Turkey in 1969.……..
See his works at
http://www.sanalmuze.org/sergiler/contentxy.php?sergi=397&ic=90&pg=0
http://www.karikaturculerdernegi.org/karikaturculer.asp?id=4159

Abdülcanbaz was one of the most famous creations by Mr. Selçuk.

And a social roundup:

Women warm themselves near their destroyed house in Okcular village in the eastern province of Elazig, Turkey, Monday, March 8, 2010.THE ASSOCIATED PRESS/Burhan Ozbilici

Unfortunately, Turkey, which is located on major fault lines, lost 51 of its citizens due to an earthquake with a magnitude of 6 in the eastern province of Elazığ on Monday. The victims for the most part lived in stone and mud-brick homes in rural parts of the province.

A man walks in Okcular village in the eastern province of Elazig, Turkey, Tuesday, March 9, 2010, a day after a strong earthquake, with a preliminary magnitude of 6, hit eastern Turkey early Monday, killing at least 57 people and knocking down houses in at least six small villages, the government said. The quake affected villages near the town of Kovancilar, toppling stone or mud-brick homes and minarets of mosques, officials and media reports said.

Unemployment Increased to 14 Percent in 2009

from Bianet :: English
The Turkish Statistical Institute announced the official unemployment figures for 2009. With almost 3.5 million jobless people 14 percent of the population is out of work. Almost half of all Turkish employees work off the record without social security.

Turkish pop singer Tarkan speaks to the media after his release outside a courthouse in Istanbul, Turkey, Monday, March 1, 2010. Turkish police detained Tarkan, the country’s best-known pop star, in a narcotics raid Friday in Istanbul along with nine other people. Tarkan, who only uses one name, and others were detained for their alleged links with two drug dealers being monitored by narcotics agents, the state-run Anatolia news agency said. Police reportedly found and seized a small amount of hashish at the pop star’s country home in the Omerli district near Istanbul, the agency said.(AP Photo )

İskender Pala, a distinguished writer and scholar who was expelled from the Turkish Armed Forces (TSK), says the TSK has become an institution that interferes with the private lives of its members.

from The White Path

[Originally published in Hurriyet Daily News] LONDON – Every time I come to this magnificent city, I admire the way the British honor their past. This time, I was impressed even more, for I had a chance to spend a whole morning in the House of Lords, at which a conference about Turkey’s emerging role in the world was held. While walking in the corridors of the splendid building, I could not count the number of statues of former statesmen that I saw. But I could well feel how tradition keeps the British proud and dignified. The Turkish Parliament, in contrast, is devoid of any symbol that will give you a sense of history. The current one is the third parliament building since the 19th century, and was totally refurbished in the early 90’s. Now it has white walls and bright orange chairs, which look anything but kitsch, and has anything but character. If there were no Turkish flags in the hall, and no drones of men with moustache, you would hardly guess this was actually the Turkish parliament.

Professor Mehmet Altan, who teaches at İstanbul University?s department of political economy, believes that the fight that is presented as one between secularists and Islamists is really in essence a class conflict in which religion is used as a tool.

French maître Sommelier Mme. Annie Crouzet and her wine expert assistant Mr. Gerard Gutierrez made a trip to Turkey between 29 April – 8 May 2009 with the purpose of discovering Turkish wines and promoting them in France. The tour included most of the wine regions of Turkey including Cappadocia, Ankara, Manisa, Izmir,Istanbul, Sarköy and Tekirdağ which is in Thrace. The names of the wineries hosted the tour were Büyülübağ, Doluca, Idol, Kavaklıdere, Kayra, Kocabağ, Sevilen, Turasan, Umurbey, Urla and Vinkara. 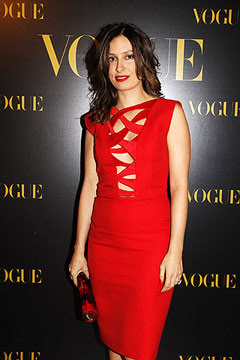 Conde Nast [2] is adding yet another international addition to their portfolio with a Turkish edition of Vogue magazine which will release it’s innaugural issue on March of 2010 and the new magazine was fêted with a launch party at the Crillon in Paris.