The police have detained three people, including a retired colonel, in an operation carried out late Thursday as part of the wider Ergenekon investigation. The police initiated a joint operation

In the mean time, it seems that Ergenekon people used cyberwar tools well. A liberal columnist’s (Gülay Göktürk’s) column once was bombarded with 100,000 messages.

Yusuf Alataş: Ergenekon a test of maturity for Turkish judiciary

Attorney Yusuf Alataş, who has taken on many cases involving political figures, has said if the Ergenekon indictment identified all the links of the Ergenekon gang, a shadowy organization that has been indicted for attempts to overthrow the government, virtually all parts of the state would be shown to be involved.

Traditional castles of secularism will be under siege when the ruling Justice and Development Party, or AKP, kicks off its plan to start campaigning early for the local election in March

The conscience of ordinary citizens

What do the people expect from the gov’t?

According to a poll conducted by the MetroPOLL Strategic and Social Research Center, Turkish society is making three important demands on the government: economic reforms, a new and more democratic constitution and EU reforms.

We experienced the last example of the alliance between the Republican People’s Party (CHP) and the military with a memorandum released by the General Staff on April 27, 2007 (to warn the ruling Justice and Development Party [AK Party] about approaching presidential elections).

Why is the Republican People’s Party (CHP) pursuing such an aggressive policy? What changed so that nothing remains of the main opposition party that existed three years ago? The positive, constructive CHP is gone, replaced by an aggressive party.

That the Justice and Development Party (AK Party) was not closed down was a warning to all groups in Turkey that they should read Turkey’s realities correctly. In particular, it has considerably impacted the religiously conscientious. Before making an assessment on this issue, I would like to recall the developments that paved the path for it.

Prime Minister Recep Tayyip Erdoğan took an active role in the crisis between Georgia and Russia when he decided, surprisingly, to pay a 24-hour visit to Moscow and Tbilisi.
Turkey and Iran / U.S.-approved relations – Haaretz – Israel News

The milk in my coffee curdled, a pen leaked in my shirt and the tap in the bathroom is dripping again. Call me paranoid, but I am sure the plot hatched deep within the recesses of the Turkish state to make my life miserable has moved into a higher gear.

Military sources that recently spoke with me, noting that the Turkish Armed Forces (TSK), under new Chief of General Staff Gen. İlker Başbuğ, are to give the green light for the opening of an investigation by a military court against those uniformed men alleged to have been involved in the Ergenekon terrorist organization.

A long dull moment in Turkey?

Some analysts interpreted the decision of the Constitutional Court as heralding a long dull moment for Turkey. A closure case against the ruling Justice and Development Party (AK Party) had the potential to create the biggest political crisis in domestic Turkish politics in recent years.

This week, I have left the doors open to various ways for the "wounded" Justice and Development Party (AK Party) to deal with politics and its obligations, on how to handle the "loaded" agenda.

Yusuf Kanlı: The imam and the teacher

Without underestimating the importance of the prime minister publicly scolding one of his ruling Justice and Development Party, or AKP, deputies I have to underline that the euphoria over the AKP disowning the “poisonous idea” of Edibe Sözen introducing an anti-porn bill is very much like the lost-and-found donkey Nasraddin Hodja …One day Nasraddin Hodja loses his donkey. He spends hours searching for it, looks everywhere, but can’t find the donkey. Villagers start making fun of Hodja, saying, “You claim to know everything, that you are a very clever and able man, but you lost your donkey!” Eventually, he finds the donkey grazing on the slopes of a hill outside the village. He turns to

The imam and the teacher – II

The founder of the Turkish Republic had told an education congress, while the War of Liberation was still continuing, that the future of the country would be shaped by teachers who would raise the new generations of Turks with contemporary knowledge, skills and scientific thought.Not only primary education – which was made compulsory and standardized like the secondary education with the “Uniformity in Education Law” – but vocational schools, as well as mass education programs like “Halk Evis” or “People’s Houses,” were established and encouraged to take science and literature to urban Turkey.Alas, as time passed the importance attached

Turkey breathed a sigh of relief when the governing AKP narrowly averted closure late last month. But the country’s problems are not over: not least since the Ergenekon trial may expose preparations for a military coup, as well as past assassinations and violence"

Nine Turkish soldiers, including a lieutenant colonel, were killed on Monday when their vehicle was struck by an improvised explosive device (IED) planted by the outlawed Kurdistan Workers’ Party (PKK) in the Kemah district of the eastern province of Erzincan.

Ergenekon Is Not Fiction

An answer to those, like the misguided pundit Barry Rubin, who claim Ergenekon is a fiction, can be found in a  recent declaration signed by three hundred of Turkey’s top intellectuals (professors, jurists, artists, writers and journalists) urging a full investigation of Ergenekon and its links to the state. I’m familiar with many of these names and they are not, as Rubin would like to believe, pawns — or even supporters– of the AKP. They are independent thinkers across the political spectrum. The declaration urges a clean sweep and calls upon all the institutions, whether civil or military, to show the necessary determination to keep the case alive and deepen it to reveal the rest of the connections. (click for article)

One aspect that remains overlooked or ignored in discussions over rector appointments is what we understand "democracy" to mean. As you may know, he president chooses one of the rector candidates for a four-year term.

This highly regarded 69-year-old man is “the Blonde Professor” of Turkey’s Kurds, since — as Martin van Bruinessen of Utrecht University has very appropriately said — for many years he was the only non-Kurdish person in Turkey to speak out loud and clear in defense of the rights of the Kurds.

Think of a terrorist organization that lives on blood! It feels obliged to carry out attacks. If it did not attack, bomb or shed blood, it would be impossible for it to stay alive and breed militants.

The Left and parliament: An interview with leading Turkish socialist Ufuk Uras. 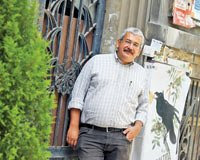 Despite a revolutionary upheaval in a west European nation being about as likely as West Ham United winning the Premier football league, we still have sections of the UK left rejecting parliamentary politics. The most they will adhere to is the use of elections as a propaganda vehicle. I find this not only plain daft but defeatist to the core; and a betrayal of the working class people whose best interest the left claim to serve. For in todays political climate, in which all the main parties advocate centre right economic theories that have exploiting the masses at there core, it is imperative that the working classes have a voice in parliament and local council chambers.